A good week to everybody! I sometimes wonder that I may have spoken too soon last week regarding keeping my joy. I have been tested sorely to know if I could really back up my claims I made regarding my sweet joy. I have had feuds with my friends especially my dear Ario who’s still not talking to me. Lola had yet another incident yesterday and is currently at the hospital (mechanic’s – beginning to wonder if I’m being scammed or not by these notoriously wily but short sighted fellows). It’s just one thing on top of the other, The most infuriating thing of all is that no one has lifted a finger to find my two hundred plus daughters who were kidnapped up north except for their parents, well wishers and foreign nationalities who till today are still ‘helping’ us wipe our smeared backsides in full view of the whole world; a case of the outsider actually grieving more than the bereaved. No matter, it’s of little consequence anyway; in a week’s time we’d have forgotten about the heartbreaking story of the hapless early teenage girls carted away far off north to fill violent men’s bellies, and have their bellies filled in return, and thank God it didn’t happen to us, until it does. Like I said before, I’ll vent my spleen, and then grab my joy back. 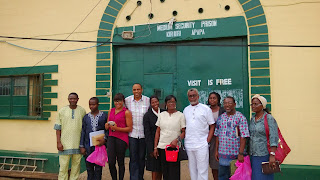 I had some real joy on Easter Monday last week when I went to visit the medium prisons at Kirikiri in Apapa, Lagos. A friend and colleague of mine, Evangelist Taylor, had invited me to join him in celebrating his 61st birthday at the Kirikiri maxim- sorry, medium prison which I curiously accepted but not without some angst. You see, the Apapa traffic is one I have a serious dread for. This is because being the main seaport of the country, the traffic, owing to the ubiquitous trailer-lorries laden with all kinds of goods, and their drivers who are a law unto themselves, routinely cause traffic snarls all over the place, adversely affecting businesses in the area. It is also important to point out that 70% of these trucks are forty years old or thereabouts, and as a result, are prone to breaking down all the time and consequently blocking traffic. Be foolhardy enough to vie for the right of way with them and you’ll be given a ‘crash’ course on the demerits of fighting with a forty year old truck: no brakes, 75% blind spot, ability to move only in a straight line as every attempt to turn even an inch to the left or right requires al the manual assistance of the driver’s mate, and above all, a very silly and stubborn driver! I say all this to say that I only dared go to Apapa because it was a public holiday and so I knew there would be no truck on the road.

I got to Apapa without incident and drove past very long rows of parked trucks until I realized too late I had made an inadvertent illegal turn at a market square – there were no road signs warning against this error. I only knew about the error from the menacing way the police and LASTMA officers came hulking towards my car, almost licking their lips in anticipation. They didn’t know that one whose buttocks have been stung by a soldier-ant is always cautious of where next he plants them. I leaned forward, my nose almost to the windscreen, grasping the steering wheel tightly with two hands, a fierce look of concentration on my face looking this way and that, as if trying to look for a familiar landmark, a look not unlike that of a sixty year old granny daring to pick her grandchildren from pre –school. I squinted my eyes and tried to look as stupid as possible as the officers pounded their fists at the car for me to stop. One of them even attempted to jump directly in my path but jumped back immediately when he seemed to realize that he might get crushed by this clueless driver who did not even seem to know his bearings. That was how I was saved from paying for some official’s child’s school fees for him.

I finally got to the prison gate and the rest of the incredible experiences I had there, are they not to be written in tomorrow’s conclusive post; this post being in the danger of being excessively long? Be sure to sign in tomorrow to read about Apapa – Kirikiri. In the meantime I leave you all to a glorious start to the week. Have a great day everyone!