A good day to everybody! Immediately I went through the Kirikiri Prison gates I spotted Evangelist Taylor (the good looking white bearded man in the photograph) and another dear colleague and friend of mine, Mary Lazarus waiting patiently for me along the road. E Taylor was particularly pleased to see me and hugged me very warmly and led Mary and I towards the prison gates, my first prison gates. 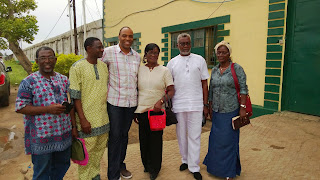 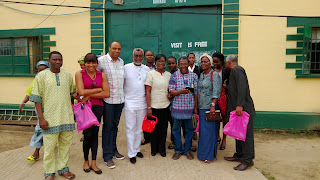 The gates looked formidable while trying to look friendly and inviting with their fresh paint and casually lounging guards sitting on the gnarled exposed roots of a nearby tree; I wasn’t fooled. I waited, we waited behind Taylor, Mary and I, as if he was our only genuine reassurance that all would be safe with us behind those gates. I didn’t know what to expect to behold behind them. Would a strong heady wave of the stench of unwashed bodies come rolling out to us, or would we be walking through a gauntlet of dark mazes with flinty, beady eyes peering at us from the darkness barely held at bay by dim pools of light provided by even sorrier looking light bulbs up above? To my disappointment a small bye door etched from the gate was opened to us and we walked through to a considerably large cavernous reception hall. It was lit up by the natural light coming from the courtyard about twenty metres away and while not being very well lit, one could not only see that it was spotlessly clean, but one could catch a whiff of the slight pine smell of mango trees hidden from view. We were asked to hand in our phones to an officer behind a mesh wire fence, dashing hopes of sneaking an insider picture or two of the potential goings on within the facility. As we walked in, I glanced at my watch and silently promised myself I wouldn’t stay an hour longer in the place before I left for other more ‘lucrative’ engagements, my conscience suitably elevated from my charitable deed of the month; it was 11.30am. We walked into the courtyard and stopped short, Mary and me.

It was breathtaking. The forbidding walls enclosing the prison were just a façade because a completely different picture lay spread out before us. There were no high concrete buildings with porthole windows and security turrets with armed guards standing watch. It looked more like a prestigious secondary boarding school from colonial times, and the typical prison colours cream and dark green were accentuated by large green mango trees and long rows of low shrubs covered with bright yellow flowers emblazoning the yard with their brilliance. A row of colonial buildings formed a perimeter around well manicured lawns, a modern basketball court, a football pitch and, I’m not sure if a lawn tennis court was present but I could definitely make out a table-tennis table or two. Oh, there was a mosque and a church as well, and into the church we went.

It was a large hall and was filled to capacity with the seated inmates occupying most of the space from the mid front row to the back of the hall. They wore mufti – a military term for civilian clothes, I learnt that from boarding school – and most of them wore poly-foam bathroom slippers. The front row was occupied by about twenty young men in uniform colours of the same printed fabric. They were better groomed than the others and all wore shiny black leather sandals. From the musical instruments before them I could tell they formed the prison choir (would you believe that since childhood I am still tempted to spell ‘choir’ as ‘quire’?). We were ushered to a row of chairs adjacent to the front facing inmates and sat to listen to the preacher.

Interestingly, I noted that the preacher preached a message of hope, not the typical ‘waiting to get to heaven before you get your reward’ but offered hope to not only re-entering the outside world of freedom but also the freeing of the mind from prison and going out to achieve great things. Great men who had once been imprisoned were made examples of: John the Baptist, Joseph, Obasanjo, Mahatma Ghandi; great men who were once vilified as these ones seated were. It might seem inconsequential to some, but for me, it was a huge step in the right direction. It swelled my heart with pride that our government, and private groups actually cared enough for erring citizens to invest in their future through genuine rehabilitating programs aimed at making them even better members of society.

Sadly again, my motor mouth and my love for painting pictures has brought us to another annoying end to this post, but, gladly, even the least hope is not lost as I will be rounding off this story not a later than May the 2nd, the day after tomorrow by hook or by crook. I want to thank you for your patience so far and I would also like to use this opportunity to thank Tracy for her encouraging words plus a huge welcome to my irreverent Formerly Stealth Reader who is still the ‘master’ of stealth as far as I’m concerned. Welcome back to the fold, lost but found sheep – you have been missed. Have a great a day everybody and see you very soon